I can only marvel at the energy requirements and the tenacity of that singular individual called Rumple/Jolly Goodfelow. [Taken from Alan Clays clown website]... 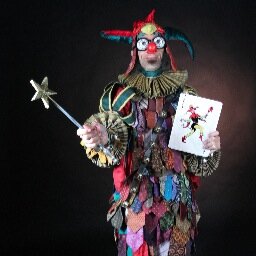 "I look at the ground and then look up at the stars and I think 'Crikey! How can one get their head round the spectrum of the universe?' Life certainly is an overwhelming inner and outer journey to experience. At times life can feel like trying to meditate in a room chock-a-block full of bric-a-brac, with multidimensional stream-of-consciousness visions passing through the mind a zillion miles an hour.

Life is performance art and we are all in its theatre playing our roles. Life is a performance on and off the stage. My natural life feels more like a show than when I'm performing at times. I have never done a rehearsal for one of my shows ever. Am I the master of no routine? I have travelled the world performing with no show. I guess that is my show, 'No Show'. I must be doing something right. Maybe I do have a show. Sometimes I wonder. The audience can be the judge. I could be the world's most unprofessional professional or professional unprofessional.

I used to carry a 4-wheel granny trolley around Europe. It travelled to 30 countries with me. It's a miracle that I did it in such a ridiculous style. Who on earth could be bothered carrying one of those around the world? It was stuffed with as many props as I could possibly squeeze into it.
I guess my granny trolley didn't make it easy for me when I turned up in England for the first time from Australia. I was sent back to Australia for the suspicion of coming in as an under-the-table jester with the intention to jest (wildcard style) without permission.

It's not an easy gig being a jester these days and especially when there are no castles in Australia. It's a bit of a paradox. It's a laugh: the idea of representing my country when I'm abroad, being an antipodean jester as there's not much tradition for this profession in Oz. I feel at heart with the art of being a jester as a profession, as it rhymes with being a bit of a natural fool in everyday life. It's not an easy art: always trying to obey the laws of logic.

Laughter is the greatest high of all because it comes from the heart. My goal is to help spread more healthy humour into the world. Making people happy through laughter is a true gift of love. I am very privileged to have the freedom to be creative. Quite often people say 'What are you on', when I'm performing as a jester. It's amazing what a costume can do. I say 'I don't need anything! Why not get high on laughter? Laughter is the jest medicine. Don't be a fool to your spirit!' How do you like my foolosophy?

Send in the clowns and help cheer up the world! They should give the soldiers at war clown toys to play with instead of weapons. It would help make people laugh, instead of cry, which would hopefully set off a chain reaction of laughter, far and wide as to speed up the happiness of the world. Laughter mantras should be made compulsory for the whole human race to practise. It would be much better to die from laughter, as then at least we'd go in a funny way.

It's a constant effort to keep a childlike innocence in this complex world, so it's good to relieve the tension as much as possible with the spirit of fun. Live out your dreams. The best things in life are free. I think I'll wave my fool's flag for eternity. See you at the end. Every end has a new beginning. Do you call this soul clowning? Keep it simple. Silence is golden. The laughing Buddha will tell you. Who knows better? We can only go by human perception. Gorblimey! Am I a joke I can't get out of? What the heck! The show must go on! Toodle-loo! Love to you all! Signing off, the undercover jockey jester with the girl's voice! Rumpel is my name! "
Posted by winsomecowboy at 4:53 PM No comments: 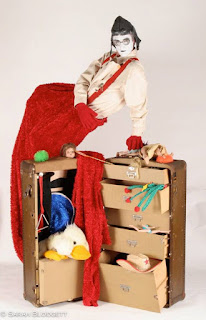 I've had more Sat nights than you've had hot dinners. I had them every night of the week for decades internationally,

As an isolated social hermit Saturday nights are a series of unrelated trains of thought. So that hasn't changed.

Tonight I went 10 mins carriage to carriage down the train we'll call the 'Farewell Humanity Express'.

These are all facts, confirm them at your leisure.

** one pound of plutonium evenly distributed to the lungs would kill every human on the planet.

** Since the mid-20th century, plutonium in the environment has been primarily produced by human activity.

** We've put 5 tons into the atmosphere with atomic testing. [most of that is not ingestible but not all]


** The amount of cesium-137 that has been released at Fukushima is equivalent to hundreds of Hiroshima bombs and is still ongoing as 3 cores are still in meltdown and no-one has got close to where they are without instruments burning out before recording 'unimaginable' radiation.

** Salmon carrying traces of caesium 134 particles – the so-called fingerprint of the Fukushima – were found by researchers in the seas off Oregon.

** It's concentrated in food chains but also is conveyed on crops via rain.

**  Plus Chernobyl, plus every other leakage ever. [I was told in Tawain that one of there's was leaking 7 pounds a year]--not fact, hearsay.

I figure the climate and most supporting species, insects, bees, pollinators will go in the next 30 years and we'll rot on the vine for 100 after that.

But my point is, although we're the first extinction that will be toxic [although a plague coming from some ice age might continence that]

We may take some small pride as a species for inventing primitive sandboxes for self sustaing silicon based artificial intelligences that can run on either methane or oxygen and don't need emotion except for theatrics which is why they'll keep us around. Sound like yesterday?

within 25 years the only people automatically exempt from termination review by AI's are those that went to clown school.

See? I still have hope! Anyway, just a sat night thought.
Posted by winsomecowboy at 2:44 AM 1 comment: