Well when there was just one I was satisfied but now there are four as the cover designer toys with 'Design elements'
This raises serious issues. Choices have to be considered, decisions must be made. Elements must be pondered and pros and cons deliberated until some fortuitous and contextually  harmonic  amalgam is reached .
Let me help break it down.
Black and white or sepia?
Title and author Font from 1/2/3/4?
Secondary font ie " One clowns alphabet" from one or three?
red line [I'm told it's a design element-]  [ITS A RED LINE, WHAT DOES IT DO?]
Red star, yes or no?
Full photo frame? , ie 3 and 4
Or non full photo frame? ie 1 and 2
I haven't done the math, hold on....... OK done the math 14 variables,
so combinations are 14x14= 196 combinations.
I NEED ALL THE HELP I CAN GET!
PLEASE!
My thoughts.
If someone could explain what the red lines purpose is that would be good. What does a 'design element' do? What is it's function?
I like the full photo better than the photo as only part of the cover. What do you think?
I like the star and I like the almost unreadably curly secondary font but think that 'one clowns alphabet' is a good intriguing element that might evoke curiousity and so wonder if, even though I don't really like the, to me clunkyness of the sub font in one and two , it might serve it's function of being immediately readable and thus, 'curiousity generating' than the prettier subfont used in three and four.
that will do for now. This blog hardly ever has anyone comment so my hopes are not high but I do know people read it daily, I have a counter and everything and would very much appreciate it if I got some advice. Thanks in advance. 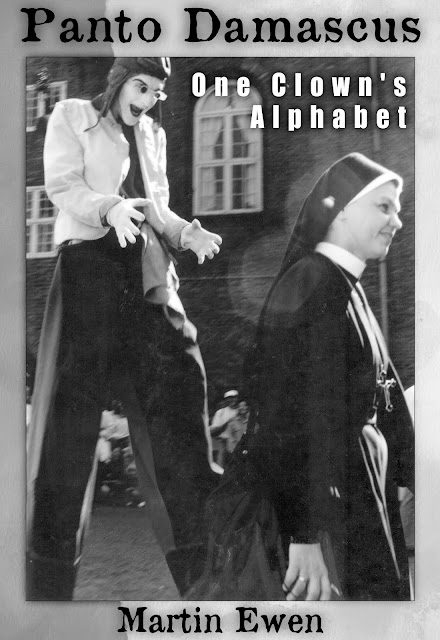 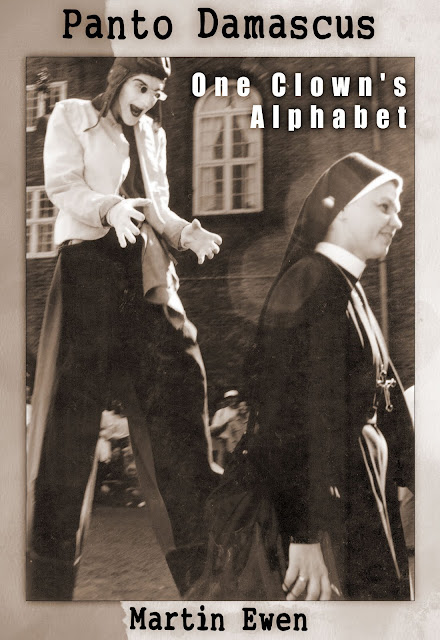 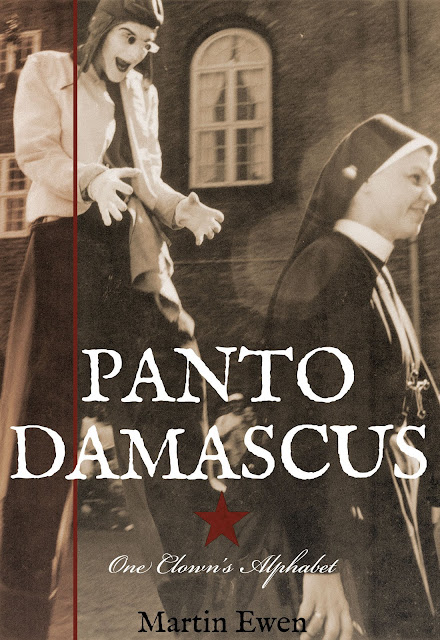 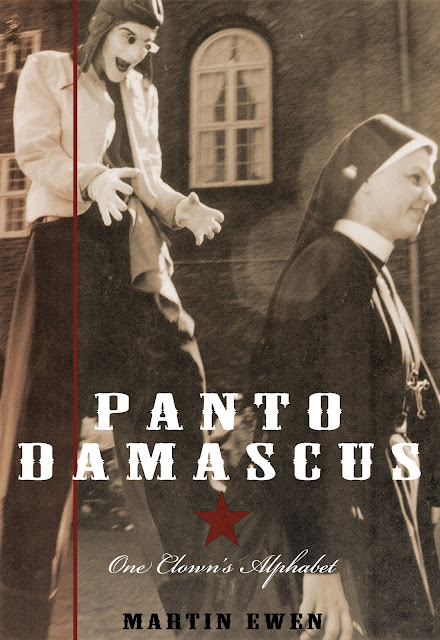 Posted by winsomecowboy at 2:05 AM

Black & white - there are no "sepia-face" clowns, so far as I know. Keep the full-bleed title and font of #3 (#4 looks like a cheesy Western). Lose the red line - distracting, and it bisects the protagonist. Up the size of the sub-head, move it up closer to the title, and lose the italics. You need legibility here, and I agree that it's meant to engender curiosity. I could care less about the red star - why a red star? Why a star? Some punctuating element, ok, but this appears like a random dingbat. Is there not something that has context that could be used? Something relating to the alphabet, perhaps? Typewriter key?

Here's a comment from elsewhere that got the most votes. I'm interested in non designer input as well as those with the lexicon.

The first two are pretty bad, mostly because of the placement of that hideous Impact-esque font. Fortunately, the third one is the best without a doubt, here's why:
The font is much better and fits the pictoral subject matter.
The sepia toning is an improvement because it works with the font.
The positioning of the text creates a symmetry that lets the reader follow the title through to the author clearly.
The off-set red line is a nice touch; it creates the presence of a window or frame that conjures up a sensation of movement or distance. Hard to explain, but it works.
Unlike the first two, there is no border- this is good because for a lot of designs, the presence of a border makes it look more like a flyer than a book cover.
The fourth option is also good but the "saloon" font seems somewhat misplaced here.

as far as signed copies go...

I'm additionally putting out a softcover at about $14/15 dollars, that also gets me a profit of around $2 a copy.

The trend with booksales is digital but I'm dual tracking with soft cover/hard copies because I know that real books are cool. I like me some books too.

as you can see the price is much higher and I hope more people buy the kindle version because it's cheaper and easier and the price is worth a gamble although I'm encouraging all readers to market simply via word of mouth. If you like it , tell 3 friends.

For signed copies I'd purchase the book, have it shipped to me for signing and then ship it on. This will increase the cost again.

One suggestion is that people who want signed copies find me a gig nearby and I'll bring them a signed copy. You know who you are. : )

also Lynne I've taken your idea of replacing the star with something more me and am looking at having these things as icons, one or the other or both either one or three or a mix of the two elements, one in the middle one on either side.

The mask will be isolated, no shoulders and may be a different color
http://www.giovannifusetti.com/public/image/capo.jpg