One thing about my creative modules I've noted its they don't seem to age.

I'm wondering whether to re-produce an old piece of theatre I [and Daniel Pearson] created and shop it around festivals?

It was performed over 30 times, it works. The script has lain idle for close to twenty years.

I could see it being a precursor to a festival, a buzz creating preseason. Or a parrallel piece, set in various restaurants.

It requires minimal props, it's production is cheap. It's a 20 minute piece usually unnoticed for the first 5 or 10.

I wonder if I should try and shop it around?


Is a set piece duo mime show set in a public restaurant.
It was initially created for Perth City Councils annual summer program of inner city entertainment.
Using elements of invisible theatre, mime, pantomime and increasingly absurd character development, the piece develops from invisible theatre through to overt pantomime and essentially involves an excessively pedantic food critic and a waiter pushed too far.
The motivation for this work work was to produce an initially subtile piece of theatre that didn't impose itself theatrically on dining patrons but rather evolved in their midst. It was important also to be sensitive to our host restaurants prime function which is to provide quality atmosphere service and food. Our brief was obviously to add and enrich to rather than subvert the atmosphere .
I had researched restaurant pieces, mainly English and wanted to produce something that moved away from the accepted character farce and more in the direction of studied eccentricity while still employing basic theatrical structures.
I wanted to construct a piece that was self contained ,a performance that could be referred to by an audience while relieving them from the necessity  of direct engagement.
(The dreaded "Approaching Violinist" syndrome)
Evolving from the pretext of a regular interaction between two characters, a waiter and a food critic into studied absurdity the piece was constucted to allow audience members to spend at least some time unsure of the context of what they, at various stages, began watching. The performance itself becomes a topic of conversation.
The piece is in fact initially invisible before graduating via eccentricity into apparent theatre.
Its a twenty minute piece scripted to 100 cues.

It involves an evolving surreal interaction between a waiter and a food critic. It is a non verbal piece.

Food critic arrives and is shown to his table.
[ Costume was tweed sports jacket with elbow patches, shirt and tie.]

Food critic takes out small pad and pen and places them on table.
Fastidiously surveys table, switches position of salt and pepper, vase whatever..
Glances slightly furtively around before surreptitiously extracting a retractable tape measure from his pocket under the table and quite subtly measuring the distance between the edge of the table and the ends of the knife and fork then writing those figures on the pad placed on his right and then using the end of the the tape pushing the ends of the knife and fork a set distance from the edge of the table then, self satisfied at his successful subterfuge he waits.

The waiter passes by and the food critic catches his attention with a raised hand and finger and mimes a menu, opening and closing his palms. The waiter nods and exits, returning with the menu and standing to the food critics right as he studies it.

The food critic points at a dish on the menu, the waiter brightens then remembers that item is not available and conveys that by mimed mumbling and hand movements, [hands palms down, one on top of the other then moved away from each other twice]

The food critic shrugs nonchalantly, studies the menu again and selects a second dish, the waiters reaction is repeated. The second option is not available.

The third selection is, the waiter exits with the menu.

The food critic after a short while [2 /3 mins] on his own realises there is no water on his table .
The waiter is hovering some distance away at the kitchen entrance.
The food critic raises his hand and finger and gets the waiters attention. Mouths the word ‘water’ while miming tipping a glass to his lips.

The waiter looks confused. The food critic repeats his actions.

The waiter, questioning, mouths the word ‘water’ and mimes breaststroke.
The food critic nods affirmatively and shortly afterwards the waiter arrives with water and pours it then departs.

Then follows at least 5 minutes of waiting. The water is sipped, the surroundings are gazed at, but eventually, slowly, the food critic begins to get drowsy, eventually succumbing he nods off sitting.

He remains sleeping for a minute or more before the waiter arrives with his meal and stands beside him, a little bewildered at the situation before clearing his throat [the only vocal sound produced in the performance]

The foot critic snaps awake abruptly, the waiter places the meal and begins to exit.

The foot critic immediately calls him back. The food critic is not satisfied by the aspect of the plate and mimes the turning of the plate. The waiter is surprised but does rotate the plate a couple of degrees and looks at the food critic for confirmation. The food critic is not yet happy and yet again the waiter rotates the plate. Satisfied the critic dismisses the waiter, looks at the meal fondly, then picks up knife and fork and puts first food into mouth. Stops, puts down cutlery and beckons waiter firmly over.

In answer to the waiters inquiring expression the critic places his palms above the meal and mouths, “It’s cold” He does this twice. The waiter, understanding but a little miffed takes the plate and returns to the kitchen with it.

one to two minutes pass

The food critic’s attention is elsewhere as the waiter re-enters the room, walking backwards through the tables, holding a  lit candle underneath the plate of food, moving it about under the plate in an attempt to heat the meal.

Sighing, the food critic attempts to move his plate in an anticlockwise [or clockwise--who cares?] fashion to find that the plate is indeed very hot.

[Also, because a candle has been used to this effect, the bottom edges of the plate are coated with soot.]

The food critic moves the plate in increments and between these applies his fingertips to his face in contemplative poses.
In doing so he streaks soot across his face very obviously to all but him.

The food critic then eats his main course with due intensity while making occasional notes.

The Waiter nods and removes the plate and goes into the kitchen.

The waiter emerges from the kitchen carrying a dessert menu written on a blackboard and does not bring it to the table but catches the food critics attention and holds the menu aloft at a distance of a couple of tables away or at the kitchen entrance.

The food critic squints at the blackboard then reaches into his jacket pocket and brings out a spectacle case which he opens to discover it empty. He pats various pockets fruitlessly then squints again. The waiter looks on expectantly.

The food critic signals that he cannot see the menu, he shows his empty glasses case and his attitude is apologetic yet persistently enquiring.

The waiter’s expression shows he has thought of a solution, he signals the food critic to wait a moment, rests the blackboard where it is and returns to the kitchen.

Returning moments later with a pair of binoculars on a serving platter which he crosses the restaurant with and presents to the food critic, who is momentarily puzzled but then quickly understands.

The waiter then returns to his blackboard and again raises it and the food critic applies the binoculars and studies the menu from across the room.

The food critic, oblivious to his condition and also any reaction from other patrons waits in anticipation of dessert.

The waiter re-enters with a large plate on which, placed in the middle is a solitary Strawberry.

The waiter does not understand.

The food critic repeats the mouthing the word “Cream” while miming the milking of a cow, then pointing to his plate.

The waiter understands “Oh Cream!” he mouths and quickly exits.

The waiter, growing finally frustrated, does as instructed and again turns to go but again is stopped and the ritual of “More” is reenacted.

The waiter then applies a very large blob of cream in the middle of the plate and turns to the food critic for confirmation that it finally is enough.

So now the food critic, is eating cream, finding the strawberry ,cutting it up and using pieces it to shovel  cream and eating his absurd dessert with relish unaware that his face is streaked with soot, he has large black circles round his eyes and a medium blob of cream on top of his head in a public place.

This was performed in a variety of restaurants for both lunchtime and evening audiences.
Some, formica tabled, others upmarket.
Daniel Pearson [My waiter performer and performance partner for this show- I was the critic]
who is English and who I had met at the Halifax Street Performance Festival where he was in the original cast of the duo, ‘Men in Coats’ was/is a talented clown and mime/non vocal performer whose timing and characterisation lent much to the piece.

In one instance someone approached Daniel and told him quite seriously that they had never seen a waiter as disrespectful to a customer as he was.

and on another a patron approached and leaned over me and said.

“I have never seen anyone treat a waiter as rudely as you, You make me very angry, I want to hit you in the head. I have to go for a walk now.”

Strangely both of those people were German tourists. Just saying.....

It was interesting to see how long the theatre could be sustained as ‘invisible’ that is, not recognised as theatre.

Sometimes me falling asleep signalled that there was a contrived element to the situation but often there would be an envelope of time where onlookers might suspect but not have yet confirmed to themselves that what they were seeing was theatre.

The Binoculars were the tipping point.

Before that, even with having fallen asleep, having soot all over my face and my interaction with the waiter being entirely wordless, people still clung to an idea that it could be real.

It was a very interesting experiment. We received a standing ovation from one or two venues and all were applauded.

I have not included every little piece as there were a couple of  'bits' that established character and status that I omitted in this narrative, just as any new rendition would have embellishments that came with the performers inputs into the process. 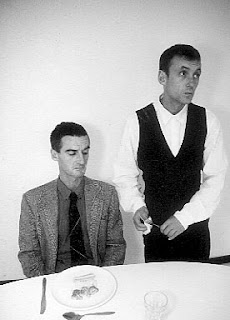