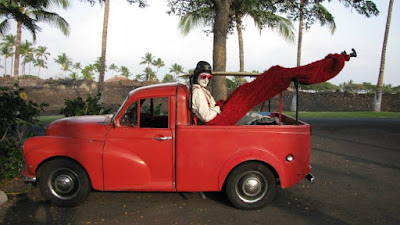 I'll preface this by stating I know generally what my problem is. I used to chug along at about 75% creative efficiency. I took my momentum for granted. A series of events took me to 0% and I'm finding it very difficult to move forward.

Now I'm married, cursed, gifted with this car. It was Robert Nelsons and he gave it to me. He was OK with me selling it at some point but I simply can't do that. It's a clown car and I'm not going to shit on it's history and Ju-ju.

But it sits in a covered garage with it's engine, transmission, radiator and drivetrain out and has done the last 6 months. The new floor panels are in a box beside it and I've paid for their installation. [but that money may need to be allocated to extended garaging fees]

It needs a new transmission, new tires, a new radiator, [the old one works but at about 50% and why not fix it if everything else is cherry?]

It needs a tiny bit of body work for surface rust and a repaint.

Earlier this year I did my last gig in Dubai and then blew out my next gig in Perth due to lost luggage halfway there. Then I had a $5000 gig go south.

These things happen but I was crawling back and only at about 35% of momentum at that point and so for the last 6 months I've been inert.

I'm not short of ideas

* try to get a resort residency

* Market my last book or compile another from my gibbering backlog

* Get gigs. explore new gigs like the hybrid 'circus/variety' module that various go-getters are coagulating towards.

But I'll admit that I'm finding it difficult to produce momentum in a vacuum. All my own fault but that said I'm still looking for help.

Because in six months if I haven't sorted this car out I'm going to offer it to clowns on the mainland or beyond to ship at their expense as the only cost.

And I really don't want to do that. It would hurt me a lot to have so demonstratively failed.

So obviously money by itself is not productive. I'm looking more for some applicable, actionable, no budget ideas and suggestions. I need some support.