This is an interesting developing story, [sorry the music recording quality's not that good ]

This guy's being playing in Brighton for years, he rocks. A local guitar bigwig came across him, filmed him playing, put it on youtube and it got a squidillion hit's.

So the bigwig went back and gave this busker about 80-100 quid which was what the hit's on his blog had generated.

Then took Andrew Niel [the busker] back to his place and gave him a choice of about 6 guitars to try out and have one as a gift, filmed-youtube, rinse repeat.


Then set him up with his own youtube channel and he's just starting out on the busking-youtube adventure. He doesn't have huge numbers but he's attracting heavy hitters, Muddy Waters has subscribed.

I hope it goes well for him. As you can see he's just giving his camera to people to film him at this early stage and his helper stuck a finger over the mike at some points but it's early days.

check out his channel.
http://www.youtube.com/user/NellySlideGuitar

Posted by winsomecowboy at 3:11 PM No comments:

Deep state background from the highly successful creater of 'limewire'. The anti-kook

The Cabal by Gawker.com
Posted by winsomecowboy at 2:04 AM No comments:

Cheap and affordable open source virtual reality, it has begun

Mark my words. This is going to take off. Why? Look at the reactions of first time users. It uses your iphone as it's graphics driver. It's open source so you can 3d print all the parts or have them printed locally, and it's cheap.
http://www.techdirt.com/blog/innovation/articles/20140404/16155026805/awesome-stuff-mainstreaming-augmented-virtual-reality.shtml
Posted by winsomecowboy at 3:11 PM No comments:

I've been pondering this week and I'm pleased to say I have something to show for it.

I watched a couple of times the video of the 66 year old who gave up his old life and now skates along beach paths on one leg at a time celebrating his equilibrium blissing out as a form of meditation as he's done for 15 years now.

At first people thought he was just strange but after time his consistency eroded their critical opinions and now he's a fixture and the public celebrates him with smiles and high fives.

I think it's because on a very deep level that alludes most but they can still recognise he's arrived.

When they get to that solution you could say they have 'arrived' and that arrival is what the audience celebrates.

A clown show like Rob Torres's, because it's a show, uses innovation and narrative and is structured in a linear wave form with multi-layered subtext, call-backs, fail fail succeed gambits etc but it occurs to me that the peaks of his waveform structure are 'arrivals'.

As performers we structure moments where we arrive at bliss because sharing that is our jobs.

You cannot take it for granted and it's a personal thing but it's strong enough to carry us through times where our shows are more or less acts of generosity. We don't always make it, we don't always arrive ourselves but our shows are designed to make sure that hopefully the audience does.

Because arriving ourselves is quite simply the best feeling there is. I know because I've experimented over 50 years with people, chemicals, commercial success, philosophies, affiliations, solitude, pride, self pity and applause among other things and can tell you that from my experiments that there is no terrestrial sensation larger than a feeling of having arrived.

-------------
Another living narrative I was reminded of after watching the ex-doctor skating along blissfully in his twilight years was Dublins Diceman, who died in 95 but started out as a sitting statue who would wink in response to donations, then stood, then grew crowds so large he'd get moved on so adapted to walking in ultra-slow motion the length of Grafton st.

He admitted that fear made him reduce himself down to stillness and then to moving very slowly. It wasn't easy, he would be attacked sometimes, other times, at least once, part of his costume was set on fire as he moved slowly down the pedestrian street. But he never broke character, on the occasion he was set alight others nearby put him out, he kept plodding forward.

He kept plodding forward because he wasn't going anywhere, he kept plodding forward because he'd already 'arrived' and that stuff is deep and somehow resonates between us on some level. He became legendary among the Dublin public. They loved him and when he died they celebrated him by carrying a coffin down Grafton street slowly, many hundreds of them, as a tribute I feel to both him and the sense of arrival he shared. 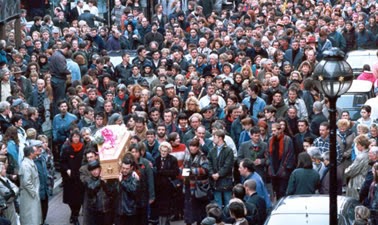 I say this because for the last year or so I've simply been waiting to die.
That might sound dramatic but I can assure you it's not. It's quite hollow and tedious.
I had rent paid for over a year in advance, enough left over for food, the sun shone every day, I had a therapist who shadowed me and I spent most of my time waiting in isolation for either a revelation or cancer.

Which in itself is unusual, an uncommon indulgence, I had lived my life, I'd had my stories, for reasons I can only speculate over I had become inert, without even the momentum to feed myself at worst. I can relate that I am indeed one hardy fucker because externally I am again fit and healthy.

I want something.
I want to arrive. I'm going to walk into my local council tomorrow and I can't do anything about my funny accent but I can try to communicate in simple terms that I want to select a public place where I can put my clown character and simply 'be' for a couple of hours a couple of times a week.

Because I know that will allow me to again arrive, and no-one likes a quitter.

Posted by winsomecowboy at 10:13 PM No comments:

Posted by winsomecowboy at 5:48 PM No comments:

Slomo, a considered eccentric who bathes in the moment. Quite profound.

Posted by winsomecowboy at 4:45 PM No comments:

When I moved to Dublin for a season I was approached many times and asked if I knew 'the Diceman'.

There was an unmistakeable pride and ownership in those who asked. This Diceman character was Dublins own street theatre eccentric and had not a cult following but a warm affectionate everman kind of love.

I hadn't met him or even heard of him and at the time I was there I guess he was dieing of aids and so not performing any more.

Google didn't exist, the internet was in it's infancy or non existent so it's taken a while for his legacy to become explorable to all.

What impressed me most, as a perpetual outsider who existed to make strangers laugh at life, was the unfathomable, unthinkable concept that a community would love this energy enough to simply cradle and support it. To own, support and love it like a parent would a forevermore amusing child.