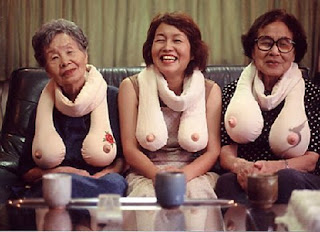 So Robert has his operation yesterday and got out of the recovery room today, He'll be in hospital maybe a week. Mostly because they can keep him in bed while Kumi doesn't stand a chance of keeping him in bed and not pulling his fucking trolley down the road collecting rubbish or mowing the lawn or bleaching the roof.

The operation was 6 hours. The doctor bumped him up from early feb and took a day off her holidays for this. She's the best there is at this particular operation. So they got everything they could ferret out out. six hours is a lot of hunting stuff down. They moved a jugular and took some muscle out but he was always a pencil neck anyway. He can move his head still and get this, he still talks. Also eats through the hole in his face same as we all do and not a tube into his gut. That was always a worry.

So he's going to get well and the chances of a full recovery are much better than before when he had rudolfs nose growing out the side of his neck. Rudolf has left the building.

He will be home in a week or before maybe two weeks on the outside and he'll spend a bit getting over the operation but all the news is good.

Once he's healed he really has no say in who descends on him. He and Kumi run a beach-house rental they own. Just book it under an assumed name and they'll be none the wiser and pleased at the income. Then he can party when he wants and you can party when you want and the world will rejoice in your pedestrian taste in drugs and definitions of bon homme.

I may get in trouble for that last paragraph, they might not want to rent it out because he and she have high standards of upkeep before and after guests. Oh well.

In short, Robert had a six hour operation and after recovering for better or worse should return to his old self.

That's a new year gift in a package not aging quite as rapidly as it was.
Posted by winsomecowboy at 8:13 PM

Thanks so much for posting this, Martin. This is great news.

Hi, read you and Roberts posts on performers.net website.

Best wishes for Robert. Really hope he does fully recover and thankyou for your posts.