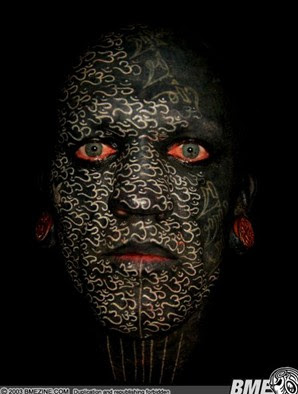 Lucky Rich is a street performer. He uses the juggling on a twelve foot unicycle template which is one of the more popular shows to adopt as it gives the performer what has now been commonly accepted among our community as the TMO advantage. [Tall Metal Object]
The higher you are the deeper your crowd can be and still see you and the further away you can attract people to your show as you perform and thus the more money per show you can potentially make. Many performers do this template, there are as many variations to it as performers however the basics tend to stay the same. It is the kind of show that allows a performer to concentrate on the relationship between them and the audience and as such each rendition is a vehicle for the personality of the performer.
Because of its basic structure this show gets adopted by performers often and it's not unusual to have, at a street performance festival, one or two or three going at once. A little sad in my opinion.
I gain perverse pleasure out of knowing from many years observation that eventually these templated practitioners will succumb to the consequence that people who jump from 12 foot objects for a living invariably confront. Their knee joints turn to chalk. After a decade or more of making easy money they are suddenly that much older and their means of employ comes to an end because that drop from the 12 footer at the end of the show is simply not worth the ongoing pain. Some make it and go onto new things, bigger better things in for example Tom Comets case, to name but one. Others simply fade away.
But Lucky has survived and still pumps them out and I sincerely hope he proves the exception because what he does is timeless and what he is is one mans spiritual and/or philosophical journey broadcast moment to moment both onstage or off.
Lucky is additionally the most tattooed man on the planet.
I have known Lucky over 20 years. We stood somewhere between friend and associate for many of the earlier years. We were both arrogant in our different ways, he because he had worked in traditional circus from his youth before he took up street theatre and was as well competitive and combative by nature and I because I considered myself an artist and had a tendency to forgo potential income by performing using dynamics that were not optimal for income and also, and I still carry this, I have a superior intellectual stance that may well be brittle but is too well verbally defended to bother confronting. Now we are both older I would say as we both recognise being friends means an acceptance of separate journeys taken together.
Also early on he was to me a bit scary. He fought for himself. He had grown up in some working class suburb in Australia, been marinated in carnies from youth and simply knew he was surrounded by bullshit and bullshitters and acted accordingly. It takes time I've recognised to discover that being sensitive to the detection of bullshit often blinds one to their own production of it.
Youthful humility, bah, who needs it.
The tattoos started off with the usual couple. I think there were two, one on the leg, small, maybe another somewhere else. Hardly pivotal or definitive.
Then followed a period where he lit all his afterburners and went 'rock star'. He earned tasty wads of dosh where-ever he worked as a bi-product of polishing the same module for more than a decade. He worked Covent garden one week, Sydney the next. His appetite grew to match his formidable income which was married to his formidable work ethic. If Lucky saw potential for a show then it was on.
Once, after a couple of weeks full-on Covent garden work to build up a war-chest  the then heavily tattooed Lucky paid Savile Row a visit. Chromed teeth and tats he strolled into the strange august venerable atmosphere of one of the worlds most pompous outfitters. Imagine the look on the face of the tailor who approached him to state, “sir, I think you may have come to the wrong outlet.”
Lucky's reply, made even more grating by his Australian accent.
“Nah, you sell suits? Show-us the best you have.”
I think he had a wad of around 20-000 pounds. He got measured up and then chose 7 of the most lurid colors they had, yellow and pink and scarlet and puce. Put whatever was needed down and then came back a week later to pick them up.
I have this concept that floated by while I was compiling this piece in my head, I grasp at metaphors instinctively. Lucky for the first decade of street performance was surfing his own wave with his eyes on the beach, keeping his balance instinctively and reflexively adjusting to conditions underfoot, that confidence of youth thing where your trust in yourself is absolute. It's all so easy.
At some point he looked down and in that moment lost his board, hit the water and spent time being churned. When he surfaced he'd happily relinquished all thoughts of the beach and now focuses on bobbing round in the moment trying to be kind and patient and generous to himself and others.
He has no formal education however he's pursued a rambunctious extended semester dedicated to finding his own peace of mind. He's definitely graduated and is certainly more comfortable with himself than anyone who judges him.
I once remarked to him back when I used flippant bollocks more than I do now. “I don't know if it's art Lucky but it makes an interesting frame.”
..and it does, it frames many things, Lucky's startling appearance. To others mostly because to Lucky it's just ink.
Posted by winsomecowboy at 1:52 PM

Good Post Martin,
Yup... Lucky's certainly got the balls to do whatever he wants.
He's out there!
Ciao
Jimu